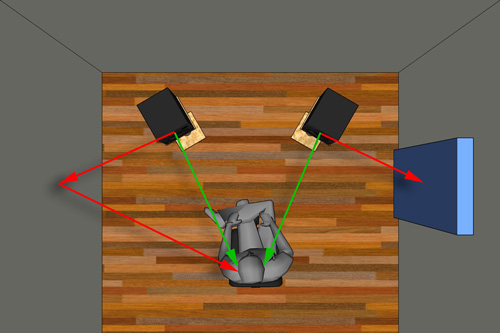 The need for treating early refection points is common in smaller rooms. “Early” reflections are sound waves that bounce off something [like a wall or the ceiling] and arrive at your ears at almost precisely the same time as the direct sound coming from the sound source. The standard treatment for early reflections is to place an absorber at the place where the sound is bouncing from to get to the listener.

The diagram below shows a sound coming from a pair of speakers. The speakers depicted below each show two paths [shown as Green and Red arrows] that the sound wave will follow.

In the case of the left speaker, because the length of the path that goes directly to the listening position [the Green arrow] and the length of the reflected path that bounces off the wall [the red arrows] are similar, the two versions of the sounds – the direct sound [Green] – and the sound that is reflected off the wall [Red] – will arrive at the listening position at almost exactly the same time.

In the case of the right speaker, notice that the Red arrow stops at the absorption panel and does not go on to arrive at the listener causing an early reflection.

The treatment of near reflection boundaries is generally beneficial whenever the two paths traveled by the sound [the direct path as shown in Green, and the reflected path as shown in Red] have a difference in length of less than about twenty-two feet. When the path length difference is greater than 22 feet then the two sounds arrive at 20 milliseconds or more apart in time. When two sounds are at least this far apart in time [20 ms], then the brain interprets them clearly as two distinct sounds.

Reflection points in front of the listener – on side walls and ceilings – are generally found to be the most important areas of concern for this type of acoustic treatment. Treating the early reflection points will enhance clarity and yield a more precise and entertaining stereo image with sharply defined locational cues. Early reflection problems are a concern in the middle and high frequency ranges, and can be virtually eliminated with our RT422 High Frequency panels.

Smaller rooms typically need a significant amount of low frequency absorption. So if you room is approximately 5,000 cubic feet [on the order of 20′ x 25′ x 10′] or smaller, then you should probably use 4″ RT424 Bass Trap panels for all your treatment including early reflection control. If your room is larger the +/- 3,000 cubic feet, and/or you already have enough Bass Traps or other form of low frequency absorption such as lots of heavily padded furniture in the room but still need to treat for early reflections, then your circumstances suggest you should consider the use the less expensive 2″ thick RT422 panels instead of broadband 4″ RT424 Bass Traps for your early reflection treatment.