In nearly every facet of music, there is a true professional who will accept nothing less than perfection.
In the professional mixing world, that person is Jeff Juliano.

If you had the chance to sit with Jeff and talk about his amazing work, the one thing you would learn quite quickly is that he will accept no less than “perfect’. True to this concept and work ethic, Jeff works tirelessly to make everything he mixes a mirror image of the artist he is working with. In his mix environment, you soon learn that the underpinning of this man’s approach to mixing is his desire for perfect and pure sound. Jeff Juliano is among the hottest mix engineers of our day, and he prefers to wear just this one hat. Though his fantastic talent for recording many wonderful artists is well known in the music world, Jeff is most at home behind his mix console weaving together Grammy Award winning records like John Mayer’s “Room for Squares” (4x Platinum) great albums like Jason Mraz’s “Waiting for my Rocket to Come” featuring the song “The Remedy” and records for Lifehouse featuring the #1 BillBoard Hit like “You and Me”. Jeff loves mixing records for multi-platinum artist Dave Mathews, (8 records in all so far) as well as records for the cult followed Racheal Yamagata. Jeff’s desire for mixing cutting edge rock records is not lost on those fortunate enough to grab some of his very valuable mix time. Jeff’s propensity to uncover the true genius in the new millennia’s latest rock recordings has rightfully given way to his new title: “the secret weapon”. Jeff’s career as a rock mixer hasn’t pigeonholed his talents however. A quick look at some of his other mix projects reveals his ability to make the artist and their art, (no matter the genre) SHINE. Some of Jeff’s other work includes mixing for Elvis, Bruce Hornsby, Josh Kelly, Ben Folds Five, O.A.R and DOZENS more.

When you look at the body of work this amazingly talented man has mixed it is easy to understand the high demand for his well-tuned ears and superlative mixing skills.

So, what does one of the most sought after mix engineers in rockdom add to his litany of vintage and cutting edge mix tools? Why, Ready Acoustics panels of course. Our President Joel DuBay met Jeff at his east coast mix facility, and was quite moved by this renowned engineer’s artistry. Jeff’s mix room is wonderfully comfortable and acoustically well tuned. It does boast a few distinct advantages over other mix rooms however: Jeff’s great ears, and some amazing acoustics. Jeff’s room is outfitted with a series of 12 RT424’s and 6 RT 422’s. Strategically placed, these highly effective sound absorption panels create a mix environment for Jeff that he truly loves to work in.

Joel talked with Jeff Juliano about his career, and Ready Acoustics:

Q: What have you worked on recently?
A: I just finished mixing Toby Lightman for Atlantic Records, David Martin for Astonish Entertainment, OAR for Lava Records, Robert Randolpf for Warner Brothers, and independent artists Jessie Baylin and My Favorite Highway.

Q: What is the most important part of your mix process?
A: I’d say the most important part is to make it sound good! Ha! On a more serious “artistic” note, I think the most important part is being able to see the vision of the song and then being able to make it translate sonically. Essentially being a chameleon to the project no matter what the format or style of music it is. On the technical end of the process I have learned that it doesn’t matter how many bells and whistles you have in your racks or studio (and I have a lot of this stuff), if you are not hearing the tracks right in your mix environment its NOT going to sound good. You will end up triple stacking Eq’s, compressors and ultimately taking way too much time mixing something that may have sounded great already with less gear, less grey hair and lastly, not having to go down that horrible road of self doubt.

Q: How have Ready Acoustic panels helped this process?
A: I have to put this one in a list so not to sound like a massive run on sentence. 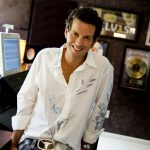